Hampshire and Isle of Wight Air Ambulance bring an advanced Critical Care Team to sick and injured people in Hampshire and the Isle of Wight available both day and night, 365 days a year. The Air Ambulance is called out many times a day to attend to road traffic collisions, sporting accidents, collapses, and many other incidents. The charity was interested in doing some market research into individual giving and brand awareness to help inform community fundraising campaigns. They also wanted the research to guide them on how to spend funds in the areas that would have the most impact. 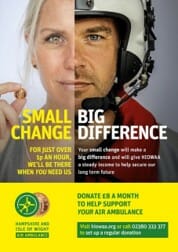 Turquoise recommended a qualitative market research approach which comprised of four focus groups: three with non-supporters and one supporter group, across various locations throughout the county and on the Isle of Wight. During the groups, respondents also filled out a self-completion questionnaire about their response to six creative communication concepts, and the findings from the questionnaires were integrated into the final report.

HIOWAA was seen to be a fantastic, vital service, and many could not understand why this was not funded by the Government. We were able to provide HIOWAA with a number of insights from the focus groups, beginning with broad opinions about the charity sector as a whole and narrowing down to the work that local charities do on behalf of local communities.

Turquoise was able to advise on the particular triggers to giving, the type of factual content that was favoured in advertising campaigns (including the choice of photographs, imagery and logo size), tone of voice, the timing and frequency of campaigns, choice of media channels and advice on suggested donations. We established that a personal or emotional connection with the campaign was essential, and we were able to recommend a suggested approach to future comms with the local population.

The key insights that came out of the research were about how people are open to, or closed off to, donating to charities, and how to influence or engage with a wider fund-raising audience.